The History of Chicago Lying-in Hospital

The history of Chicago Lying-in Hospital began in 1895 in the mind of a young, recently graduated medical student named Joseph Bolivar DeLee. The story of Dr. DeLee and the hospital he founded is the story of the development of modern obstetrics.

At the end of the 19th century, obstetrics was a neglected and almost ignored branch of medicine. Medical students were graduating without practical training in obstetrics, and many physicians refused maternity cases. Hospitals were used only by those too poor to pay for house calls by doctors, and the hospitals were often not clean. Puerperal fever killed more than 20,000 mothers each year.

Dr. DeLee theorized that cleanliness had a direct effect on a mother’s chance of survival in the hospital. He dreamed of developing a free clinic for the poor that would offer better obstetrical care for mothers. At the same time he realized that there was a need for better training for doctors, midwives and nurses. 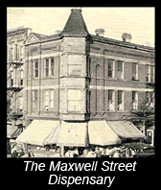 With $200 from the Young Men’s Hebrew Charity Association and $300 from several individuals, Dr. DeLee rented four small rooms at Maxwell Street and Newberry Avenue. On February 14, 1895 he opened the Chicago Lying-in Dispensary, Chicago’s first outpatient clinic to provide maternity care for needy women and the place where Dr. DeLee could train medical students.

At first, Dr. DeLee waited for patients, but none came. At times he paid his patients 25 cents to let him assist in delivering their babies. Eventually word of successful deliveries spread and women sought out Dr. DeLee. Senior medical students, student nurses and interns came to work with and learn from Dr. DeLee. At the end of the first year, the Dispensary witnessed 204 deliveries.

The clinic moved to larger and cleaner quarters across the street the following year, in April 1896, and Dr. DeLee established a training school for obstetrical nurses. By the end of 1896, 52 students and 12 physicians had been instructed in practical obstetrics. In time, Dr. DeLee would train physicians from countries around the world who would then return to their respective homelands to provide safe maternity care.

As his workload grew and Dr. DeLee’s private funds were depleted, he sought the help of a few women friends to raise money for a small 15-bed hospital in a remodeled house on Ashland Avenue. It opened in 1899. The women supporting Dr. DeLee administered the new institution. Next came a three-story building on the corner of Maxwell and Newberry streets to house dispensary workers.

Then in 1904 a second group of women, founded by Dr. DeLee’s sister, Mrs. Ida Neuman, accepted the challenge to raise money for a hospital specifically for patients with infectious diseases. Four years later the women from both groups began aggressively to raise money for a larger Lying-in Hospital. The culmination of the early work of those two groups resulted in the opening of the Mothers’ Aid Pavilion in November 1914 and the main maternity hospital in 1917.

With the opening of the first Chicago Lying-in Hospital in 1917, the worldwide reputation of Dr. DeLee and his hospital was firmly established. Chicago Lying-in Hospital became the model for maternity hospitals everywhere. Doctors and nurses from around the world came to study there. Epidemics of puerperal fever were virtually eliminated. The efforts of Dr. DeLee to build the reputation of his hospital as a center for obstetrical education led in time to an affiliation with the University of Chicago School of Medicine. 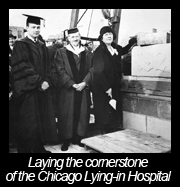 In January of 1927, the affiliation agreement with The University of Chicago stipulated that Dr. DeLee was to have a new hospital building at the southwestern corner of the University campus. He became Professor and Chairman of the newly established Department of Obstetrics and Gynecology and the Chief of Staff of the Chicago Lying-in Hospital. Once again, the Board of Directors, under the vigorous leadership of its president, Mrs. Kellogg Fairbank, set about raising money for the new building. It opened officially in May 1931. In 1938, the Chicago Lying-in Hospital merged with the University of Chicago Clinics.